I am never drinking commercial ginger ale or ginger beer again.  Not only is homemade ginger beer easy to make, it's incredibly inexpensive and delightfully fresh tasting.  When I decided this tasty project was definitely for me, I started by reading a bunch of recipes online to get an idea of what proportions to use and how long to ferment.  My first batch didn't have nearly enough ginger and didn't ferment how I'd hoped, but the second batch was perfect.  It's wonderful by itself or mixed with your liquor of choice. 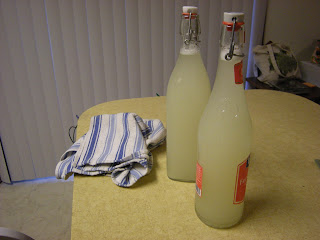 
Note: So you don't have to peel and grate all that ginger, cut it into large chunks and put it in the food processor until it's pretty much pulverized. You don't have to worry about the peel because you're going to strain it later. 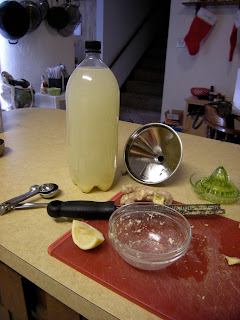 Now for the fun part: place the bottle someplace that's dark and not too cold or warm (about 64F) and leave it alone for 2 days. We put it in a large cooler and covered it with the cooler's lid. There's a small chance the bottle could explode a bit due to the pressure building up during the fermentation process. Thankfully, you're using a bottle that's already been subjected to pressure from carbonation and you're left a small amount of air in the bottle so the chance of some spilled ginger beer is small.

After 2 days, put the bottle in the fridge to stop the fermentation. Leave it in there for a day.

When you're ready to drink, set the bottle of ginger beer down in the kitchen sink (there might be spillage). The bottle should feel rock hard. Very, very slowly open the bottle. We loosened the cap the teensiest bit over time, letting the bubbles calm down before each twist of the cap. Be patient or you'll end up with lots of sticky ginger beer in the sink and not so much left in the bottle. 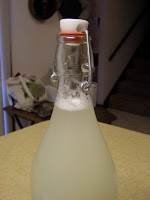 When you've finally unscrewed the cap, place some cheesecloth in the funnel and place the funnel in one of the 750-mL glass bottle. Pour the ginger beer through the strainer, leaving a bit of room at the top of each bottle. You'll have some leftover ginger beer that won't fit into the glass bottles, so strain that into a glass and drink it. Store the strained ginger beer in the fridge for up to 2 weeks (if it lasts that long).
Posted by Zippy at 1:05 PM

Cooking combines three things that I absolutely love: problem-solving (what makes recipes work or not work), being creative (what can I do with these nine pantry ingredients in under an hour?), and eating! I love making up my own recipes from scratch just as much as trying out other people's recipes. So that's exactly what you'll find here: my own easy-to-follow recipes as well as others that I've tested, reviewed, and revised.